Anders is a research engineer at Uppsala University, working on neutron particle experiments. By using an Ultimaker 3D printer, he can create sample mounts and fixtures for use during these experiments which is difficult to produce through more traditional means. In his experiments, it is a vital property that the holders are absorbing neutrons.

This technique of 3D printing the parts with boron carbide can also make a environmental impact trough replacing traditional mounts where the toxic heavy metal cadmium are used to absorb the neutrons.

Anders accomplished this by adding Boron Carbide, a extremely hard ceramic, to the filament. The testing showed that the printed parts did perform very well, but after just a few hours of printing the hard boron carbide had completely worn away the brass nozzle.

The Ultimaker 2 had a fixed nozzle, so replacing it ment changing the entire heater block. Anders solved this by designing a replacement heater block that would let him swap nozzles in just a few seconds. This later became the well known Olsson block, shipped on every Ultimaker 2+.

This did allow him to further explore the possibilities of boron carbide printing, but the extreme wear was still a problem. Not only since it was hard or sometimes impossible to finish a single print before replacing the nozzle, but also because it is important for Anders to not contaminate the printed part with metals that can become radioactive after exposure to neutrons, a potentially serious problem in these kinds of experiments.

He did evaluate the alternative available nozzle materials, and they did often negatively affect the printing with worse thermal performance, and they were still being made of metals soft enough to wear down after just a matter of hours with the extremely hard and abrasive boron carbide filament and contaminate the printed part with metal particles.

The worse thermal performance of the harder nozzles currently on the market also creates problems when printing high-detail objects with more regular filaments because of how the filament reacts to the higher temperature required.

To be able to take his printing to the next level Anders started studying the wear patterns on his regular nozzles to understand what parts of the nozzle that needed to be wear resistant, and did look into surface coatings and other ways to make it more resistant.

After evaluating different materials and surface coatings, it stood clear that something that was tougher and more abrasion resistant than any metal was needed to reinforce the nozzle, and the idea of the ruby nozzle was created.

The aluminium oxide of the ruby is not as hard as the boron carbide, but as the only materials that is harder than boron carbide is cubic boron nitride and diamond, which neither is suitable for a nozzle due to their machining properties and price, the ruby turned out to be the best possible material.

The ruby is reasonably priced, possible to machine to the correct shape, will resist almost every other abrasive filler due to its hardness, and it will still last a reasonable time printing with Anders boron carbide filament.

Anders made several revisions of the ruby nozzle design, and in the beginning of 2016, community testing started. Now, almost 12 months of product development and testing later, we are proud to say that we are sure that we are releasing one of the best nozzles ever made for a 3D printer.”

Community based testing
How the Olsson Ruby was developed 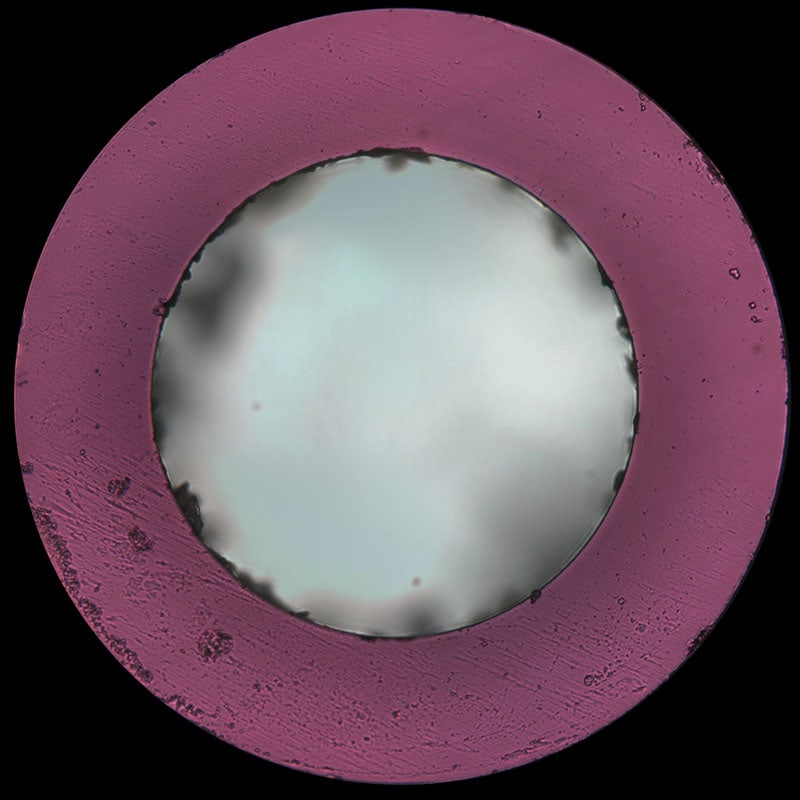 During our year-long community testing, we encouraged our testers to abuse the ruby nozzles however they wanted to, including testing it with materials and on different printers. They did deliver on that request, and the ruby was pushed to its limits. This provided us with valuable feedback needed to develop The Olsson Ruby into the mature product it is today.

One of the quite interesting insights was when one of the testers cleaned the nozzle with the rough side of a common scotch brite sponge that we realized that it can round the edge of the ruby a bit, since it contains microscopic Aluminium oxide crystals, the same material as the ruby itself.

What we found to not damage the ruby in our testing though, is printing with the very abrasive carbon fiber filled filaments, like the Colorfabb XT-CF20 or the Formfutura Carbonfil.

The image to the left is the front face of a 0.4mm ruby nozzle that were used by one of our testers in a production environment to print functional parts out of more than 8kg of carbon fiber filled materials.

The lines made by the grinding of the ruby during production is still visible, also the sharp edges of the shoulder are still perfectly defined. The black specs you see on the inside is just some remaining microscopic residue from the carbon filled filament. 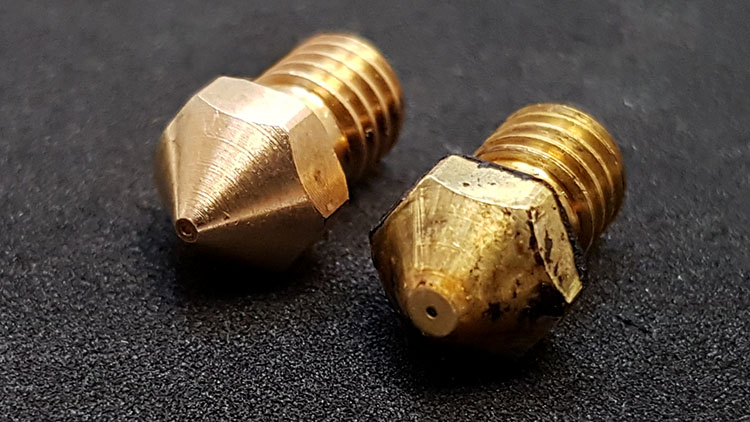 This is the wear on our common brass nozzles after printing 0.3kg of 20% carbon filled filament. 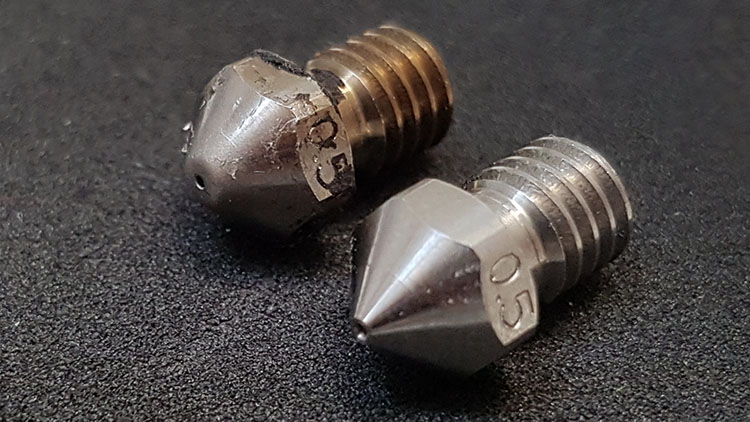 This is the wear on our stainless steel nozzles after printing 1.0kg of 20% carbon filled filament. 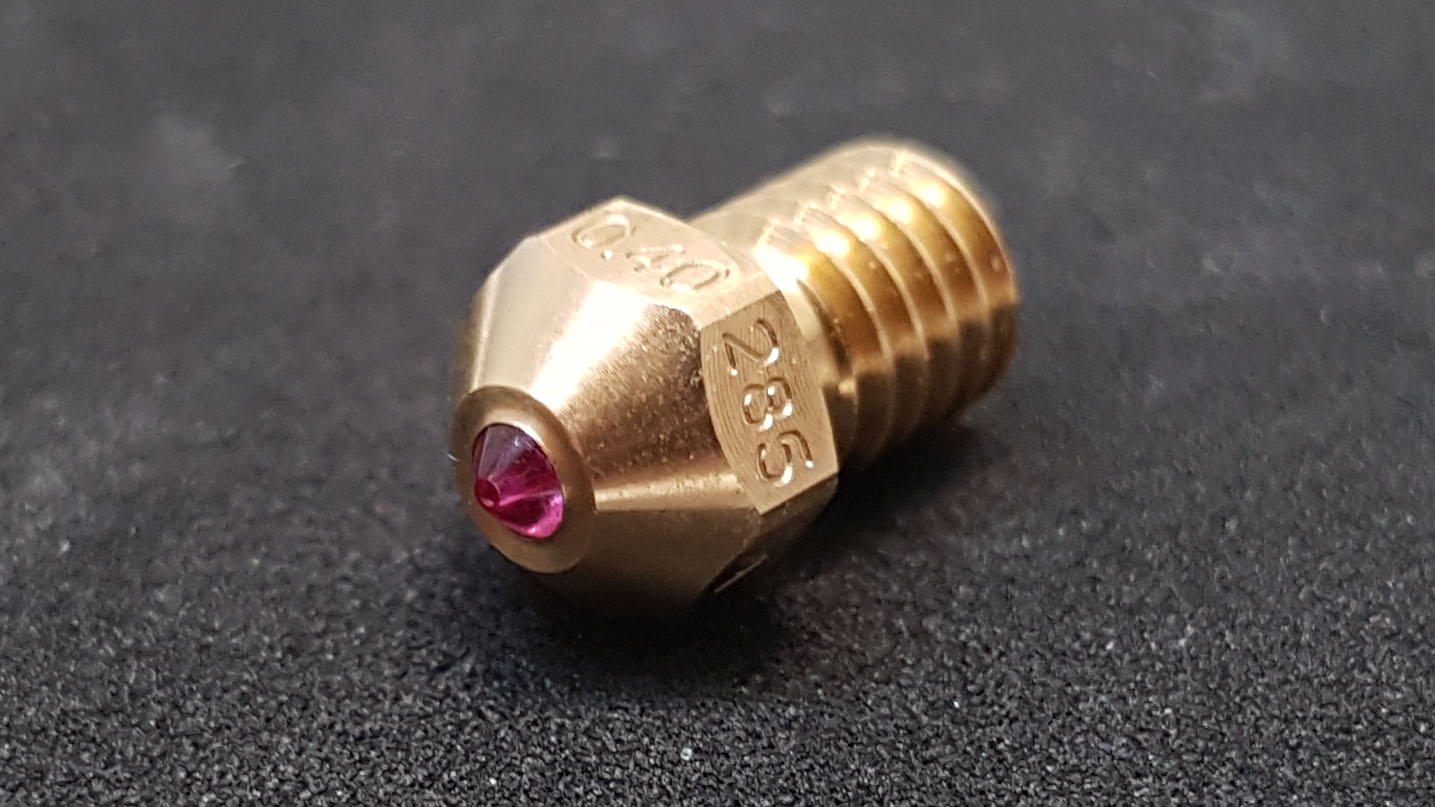 This is not the nozzle our tester used to print 8kg of 20% carbon filled filament with, this one is cleaner, but you would not had been able to tell any difference from the wear.